Cinema 4d is an amazing software. Creating mind blowing motion graphics and other animations are easy in Cinema 4d. Learning Cinema 4d is fun. You can watch tons of tutorials over YouTube/Vimeo and other web resources. But getting a full scene file is more helpful for experimenting. Isn't it?

There are people letting to download Cinema 4d scene file free of charge. They even let you to use it on your commercial projects.

Mike Winkelmann from Beeple is a great artist who create and share a lots of Cinema 4d scene files. Honestly speaking I even downloaded most of the projects and carefully learning the techniques he used to create awesome animated videos. Most of them are simple techniques, you never tried. May be, but I learned a lot. So you can also download all these files and start experimenting.

Watch some of the videos

Adding animated vehicles inside your animated scene is time consuming. And you can imagine how difficult add entire street traffic in your scene. Imagine if there is a plugin that can do it automatically for you. Yes there is a new plug in named Real Traffic (for Cinema 4d), which can create real life like traffic with simple set up. You will get completely rigged vehicles which obey traffic based on the computed intelligence. It will obey the traffic signals, stop vehicles if something crosses there way, and steer the wheel based on the twist and turns. Sounds amazing. Watch the demo video.

Get the plugin Here

You can get a 30 day demo plugin, although it is limited to some extend. 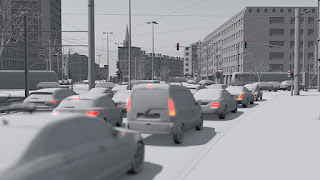 RealTraffic is a traffic simulation software1 optimized for easy creation of realistic looking traffic scenes. It is based on the Intelligent Driver Model (IDM), a robust traffic following model, developed by the Institute of Economy and Transport of the TU Dresden. The IDM is complemented by the lane change model MOBIL (Minimizing Overall Braking Induced by Lane changes), that provides voluntary and forced lane changes where braking maneuvers are reduced to a minimum.
RealTraffic simulates human driving behavior, which can be influenced by a few simple parameters and is modified with any vehicle using random function values.

In the first release, RealTraffic provides four different types of vehicles (cars, trucks, buses and trams), which can be freely configured in size and number of axles. Additionally, any number of trailers can be added so that it is possible to easily create semi-trailers, trucks with trailers, articulated buses or multi-carriage trams. Using the free Car Rig Helper and the automatic setup function there are just a few mouse clicks from downloading the car model to the final RealTraffic -vehicle.
The simulation not only controls the vehicle components, i.e. chassis and wheels, but optionally also brake lights and turn signals as well as light signals from traffic lights.

With the help of splines, lanes are generated and linked with nodes. Nodes define branches or merging lanes. This way, very complex road networks can be modeled. For creation, the functions of the plugin or the CINEMA 4D spline tools can be used. Lanes can be blocked or allowed exclusively for individual vehicles, e.g. to define the tracks for the tram or separate bus lanes.

The traffic volume for each vehicle type is defined by traffic volume objects. Any number of traffic volume objects can be used to define different volumes in different directions (e.g. rush hour on outbound lanes). The vehicles are taken from the pool you provide and automatically emitted at the starting nodes. The cars find the route to the destination nodes autonomously even if there is no direct connection. Optionally, required vehicles are automatically cloned to meet the desired traffic volume.
RealTraffic can handle the traffic without collision by just using the priority ranking of crossing lanes. In addition, the nodes can act as a stop sign or traffic light. The traffic lights are controlled by special objects being able to manage any number of light signals.
on April 30, 2017 1 comment:

You may be aware that Autodesk recently released 3Ds Max 2018. Well there isnt any mind blowing updates in this release. Autodesk concentrated on the stability and overall experience for this release.

Here are the major updates in Autodesk 3Ds Max 2018

Seriously speaking I didnt see any major improvements in this release. Most of them are related to 3rd party plugin improvements. All the rendering improvements come from Arnold render.

So what you think about this new release?
Will Maya get the same?
on April 30, 2017 No comments:

Cinema 4d is awesome tool for creating motion graphics work. In this tutorial you will learn to create some floral animation using Cinema 4d.

Corona for Cinema 4d_free for commercial use

Corona render is a photo realistic render widely used in architecture and product visualization. It is basically released for 3ds max. But they are hardly working on Cinema 4d plugin. You can download a free commercial version(alpha ver) now. It will be expired once the final version is announced.You can use it on commercial projects also. But honestly speaking it is very good render even at the alpha stage.

It is truly based on CPU engine and is far better than C4d native render in photorealism and quality.